President Michael D. Higgins visits Irish Lights today to join with the Board and staff to say Happy Birthday as the Kish Lighthouse celebrates 50 years of service on the 9th November 2015. 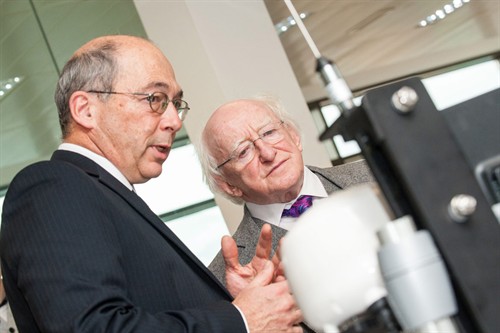 Imagine what that means.

How many millions of passengers have watched the Kish fade over the horizon as they emigrated to Britain and beyond? How many have watched its welcoming flash guide them safely back home to Ireland?

Â 95% of everything we use arrives and leaves by sea. Imagine the cargoes made safe by the Kish Light. The agricultural products, the machinery, the building materials, the household goods, the cars, the clothes; every single staple of our lives has passed the great guiding lighthouse on the Kish.

Â As a witness to social history the Kish has seen significant change. Containerisation has changed the ships and crews, air travel has changed the passenger numbers, fuel costs have allowed it witness the growth and subsequent decline of fast vessels such as Jetfoil and HSS.

Consider the lives of the Lighthouse Keepers who lived on the tower until automation in 1992.

The Kish Lighthouse is not just a seamark but a very significant engineering landmark of its day. The lighthouse replaced a lightship which was one of a series of such vessels that marked the Kish Bank since 1811 â meaning that there has been a continuous light on the Kish for the 204 years. Â

Even today 50 years after its construction the design of the Kish Lighthouse stands out as a remarkable achievement. The reinforced concrete structure was constructed in Dun Laoghaire harbour as a series of telescopic sections which were towed to the site. Once positioned over the exact location the lower section was flooded floating the telescopic sections vertically until they were secured in their final positions providing a the 31 metre tower, engine rooms and accommodation needed for this vital aid to navigation. 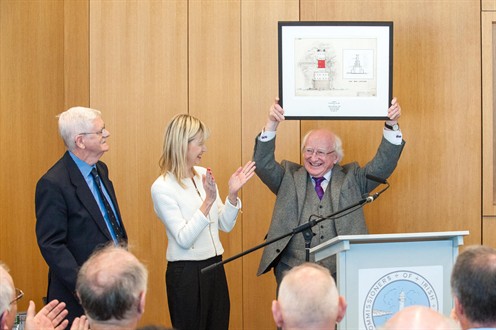 The Kish Lighthouse was inaugurated on 9th November 1965 by the then Chairman of Irish Lights, Mr. E. E. Benson accompanied by the then Minister for Transport & Power, Mr. Erskine Childers T.D., who later became President of Ireland.

Ever staying abreast of technology, in 2015, the Kish Lighthouse hosts a suite of modern aids to navigation including a 22 mile light, Racon (Radar Beacon), Automatic Identification System (AIS). In addition Kish provides live Environmental Data including, Wind Speed & Direction, Sea Temperature, Humidity and Pressure. This data is available to Met Ãireann forecasters as well as being transmitted directly to users on AIS, Twitter and the Internet.

Who can say what will the next 50 years hold? What we can say is that the Kish will continue to provide for safe navigation in Dublin Bay for many years to come.

The Commissioners of Irish Lights is the General Lighthouse Authority for all of Ireland, its adjacent seas and islands.Â  Irish Lights carry out the obligations of the British & Irish Governments in relation to the provision of Marine Aids to Navigation (AtoN) around the coast of Ireland commensurate with the volume of traffic and degree of risk as specified under the Safety of Life at Sea Convention (SOLAS).Â  Irish Lights is vested under the Merchant Shipping Acts in Ireland and the UK with the responsibility for superintendence and management of all aids to navigation.

The Irish Lights mission is to provide Aids to Navigation and Allied Services for the Safety of Persons and Infrastructure at Sea, the Protection of the Marine Environment and to Support the Marine Industry and Coastal Communities.

Irish Lights work in close cooperation with the UK GLA, Trinity House and Northern Lighthouse Board.