Yvonne Shields, CEO of Irish Lights, welcomes the Â£13M, seven year contract to PDG Helicopters for the provision of helicopter services to cover all three Authorities.

The Commissioners of Irish Lights together with its sister lighthouse authorities in the UK (Trinity House and Northern Lighthouse Board) have announced a Â£13M seven-year contract to PDG Helicopters for the provision of helicopter services to cover all three Authorities.

The decision to award a single helicopter contract across all three organisations is a first for the participating Authorities who have provided an integrated marine navigation service across Ireland and the UK for over 200 years. Modernisation of Lighthouse services has reduced flying hours requirements across all three General Lighthouse Authorities (GLA) and along with improved coordination this has allowed for a single tri GLA contract with projected flying hours of 1,000 hours per annum.

PDG Helicopters is the parent company of Irish Helicopters Ltd who presently provides services for Irish Lights. The provision of one helicopter supplier across the GLAs will deliver significant cost savings of around Â£7.9M to the General Lighthouse Fund, which pays for the safety critical work of the GLAs to provide a reliable, efficient and cost-effective Maritime Aids to Navigation service around the coast of Ireland and the UK.Â

The contract will be serviced by two EC-135T2e aircraft. This modern twin engine aircraft fully meets all Irish and European safety standards and is particularly suited for the demanding and safety critical offshore requirements of the Lighthouse Services.

Lighthouse operations present significant challenges over and above those associated with normal helicopter work. PDG and IHL have significant experience in landing personnel at exposed offshore locations, in the carriage of dangerous goods and in underslinging heavy and bulky materials into constricted sites. Work in recent years has included underslinging of a stainless steel lighthouse to Roancarrigmore in West Cork and a new lighthouse dome to Blackrock Lighthouse in County Mayo. If a major offshore light fails the IHL EC135 is a critical part of the safety response to restore the light.

âThe Marine Aids to Navigation Services in the Ireland and the UK provide an excellent example of how cooperation between our two countries can deliver significant mutual benefits.

The integrated Aids to Navigation Service ensures safe and efficient passage for cargo, passenger, fishing and leisure vessels on our coasts. Helicopters play a critical part in the maintenance of this service and I am delighted to have had the opportunity today to meet with the Chief Executives of PDG helicopters and the Commissioners of Irish Lights and to view the EC135 aircraft, which will be used to provide the service in the coming years. I am impressed at the emphasis placed on safety in the selection of PDG for this contract and at the flexible capabilities of the EC135 aircraft. It is also good news that Irish Helicopters as a PDG subsidiary will continue to play a lead role in the provision of these servicesâ.

PDG Helicopters is one of the Ireland and the UKâs leading helicopter providers. PDG is headquartered in Scotland and has operating bases across the United Kingdom and Ireland from which it flies over 11,000 hours a year supporting a wide range of onshore and offshore markets. The new seven year contract, with an extension option for up to a further three years, will commence in December 2015 allowing existing contracts to complete and for a period of training and familiarisation.

âWe are pleased to be working again with PDG Helicopters. PDG won this contract against stiff international competition. The GLA contract will undoubtedly strengthen the presence of PDG at its Irish base operated by Irish Helicopters Ltd and facilitate broader use of these services in the years ahead. This is a good news story for the General Lighthouse Authorities, for PDG and for Ireland. Helicopters provide an essential capability for the GLAs as they allow both personnel and material to be delivered to difficult to access sites in remote and often hostile environments. With safety considerations at the forefront of the procurement process, we have looked very closely at the type and capability of helicopter to ensure we provide a reliable and safe means of access to and from our sites."

âWe are delighted to be awarded the GLA Helicopter Service Contract and are proud to be supporting them in the delivery of their statutory duty for the safety of the mariner. The award of this contract is a natural progression from working exclusively with the Commissioners of Irish Lights and we look forward to extending this vital service across the entire United Kingdom and Ireland.â 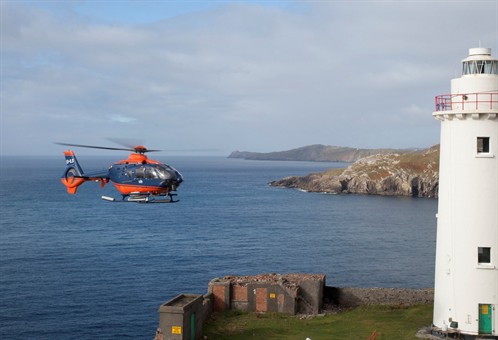 The Commissioners of Irish Lights is the General Lighthouse Authority for all of Ireland, its adjacent seas and islands. Irish Lights is responsible to the Irish and British Governments for the provision of Marine Aids to Navigation (AtoN) around the coast of Ireland commensurate with the volume of traffic and degree of risk as specified under the Safety of Life at Sea Convention (SOLAS). Irish Lights is vested under the Merchant Shipping Acts in Ireland and the UK with the provision and maintenance of general aids (300+) superintendence of local aids (~ 4000) and the marking and removal of dangerous wrecks.

CILs mission is to provide Aids to Navigation and Allied Services for the Safety of Persons and Infrastructure at Sea, the Protection of the Marine Environment and to Support the Marine Industry and Coastal Communities.

Marine Aids to Navigation around the coasts of Ireland and the UK (Lighthouses, Buoys, Beacons and Radio Aids) are provided as an integrated service by three General Lighthouse Authorities (GLAs). The Commissioners of Irish Lights serves all of Ireland, Trinity House serves England, Wales, the Channel Islands and Gibraltar, and the Northern Lighthouse Board serves Scotland and the Isle of Man.

Background on use of Helicopters within the GLAs: The General Lighthouse Authorities started using helicopters for some operations as far back as the 1960âs and following successful trials, put in place helicopter contracts in the 1970âs.Â  Over the years a series of helipads were built at various rock lighthouses, like the magnificent Fastnet Rock off Irelandâs SW Coast and at other remote lights around the coast of the Ireland and the UK. These early helicopter flights and up to 1998, when the final lighthouse automations took place, were used to carry out lightkeeper reliefs at remote stations.Â  Helicopters were also used by the GLAs Engineering Departments in support of civil engineering works during upgrading works to stations. Working in conjunction with the GLA ships, which by now had the addition of helipads on deck, the helicopters were able to undersling materials swiftly to site.Â  Today helicopters are used to transfer personnel to remote sites around the coast for lighthouse maintenance and to support capital improvement/refurbishment projects.